How Samsung Galaxy M51 Emerged As The Clear Winner For Meanest Monster Ever! | Technology News

Samsung’s smartphone, Galaxy M51, under its flagship M Series has currently become the talk of the tech town – for all the right reasons, of course. The smartphone, quite recently, took away the title of the Meanest Monster Ever with its kickass features of long-lasting battery, top-class sAMOLED Infinity-O display and segment-leading 64MP Quad Camera.

We take a closer look in to everything made Samsung Galaxy M51 emerge as the clear, undisputable winner for the Meanest Monster Ever. Keep reading!

Samsung Galaxy M51 totally knocks it out of the park with its industry-first 7000mAh battery with in-box 25W USB Type C Fast Charger that ensures the device juices up from a zero to a 100% in less than two hours. There is no doubt that a massive 7000mAh battery means that you can simply throw your charging woes out of the window because Galaxy M51 is equipped to keep up with you for up to 64 hours of talk time, up to 24 hours of internet usage time, up to 34 hours of video play time and up to 182 hours of music play time – ALL ON A SINGLE CHARGE! We rest our case. 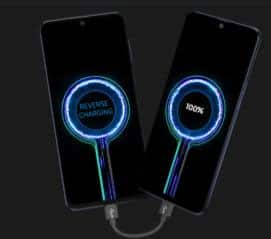 If a 7000mAh battery isn’t enough to declare Galaxy M51 as the Meanest Monster in town, then let us tell you that the smartphone facilitates Reverse Charging and comes with a Type C to Type C cable. 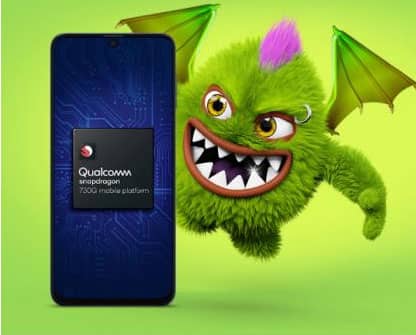 What comes under the hood to ensure a smooth, mean performance for Galaxy M51 is a Snapdragon 730G chip with octa-core CPU running at 2.2 GHz and an 8nm process that ensures to better battery life while increasing performance capabilities.

What’s more? The smartphone comes in two variants – 6+128GB and 8+128GB, with up to 512GB expandable memory that takes care of all storage woes. But that’s not it! Galaxy M51 packs in the blazing fast LPDDR4x power-efficient RAM that significantly improves data transfer speed at lower power consumption.

Galaxy M51 takes the gaming experience to a whole other level, thanks to Adreno 618 GPU with AI Game Booster that delivers faster graphics rendering and a butter-smooth experience supported by extreme power efficiency.

Delivers The Meanest Captures Ever

Samsung Galaxy M51 sports a quad rear camera setup featuring India’s leading 64MP quad camera with Sony IMX682 Sensor featuring f/1.8 aperture and 0.8 um pixel size that makes sure that you can treasure each and every aspect of your life in a frame. Apart from the 64MP Main Camera, the quad setup also consists of 5MP depth, 12MP Ultra Wide with 123-degree field of view and 5MP Macro camera for extreme close-ups. For capturing the meanest selfies, the smartphone packs in a 32MP Front Camera with SONY IMX616 SENSOR.

We hear that you can capture the vividities of life and nature with the latest Galaxy M Series camera software technology – Single Take Mode.

Single Take takes video and shoots stills – all in one go, just at the press of a single button.

Single Take gives you up to 10 outputs, of which 6 are static and 3 are videos. The six static output that Single Take churns include –the original image shot with the powerful 64MP lens Sony IMX 682 sensor, AI detected ‘Best Moment Selection’, one still image with Samsung Camera Filter, a black and white picture, one AI Smart Crop photo, a single frame picture. 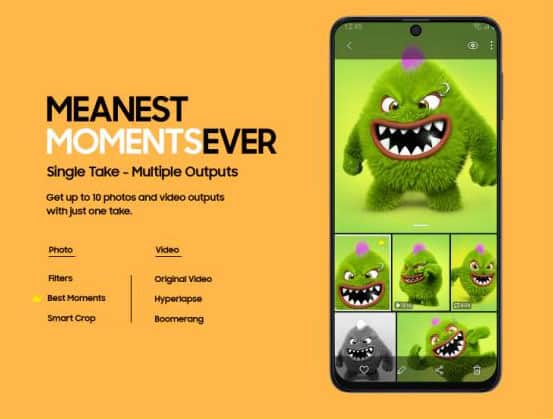 For videos, the Single Take Mode delivers an original video with with Hyperlapse and a Boomerang Video. FYI, Galaxy M51 is fully equipped to produce mind-blowing hyper-lapses even at night!

Adding the final cherry on the top is the Night Mode that captures beautiful low-light shots with no compromise on the quality, credit goes to the low aperture.

A Display & A Design To Kill For

The Samsung Galaxy M51 boasts of a 6.7-inch full-HD+ Super AMOLED+ Infinity-O display. There is a punch-hole at the top-centre which houses the 32MP selfie camera. The device is extremely sleek, slim and light. In fact, we hear that the display is up to 13% thinner than most sAMOLED Panels and, the smartphone weighs only 213 grams despite accommodating a massive 7000mAh battery. Now, that’s what we call mean and impressive! The smartphone is a winner inside-out. 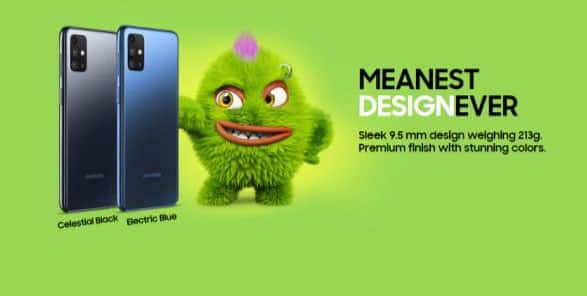 On the inside it runs on Android 10, OneUI for an immersive experience and, on the outside Galaxy M51 wears a premium finish and comes in two stunning colors – Celestial Black and Electric Blue.

No Compromise On Security

Samsung Galaxy M51 facilitates both face and fingerprint unlocking systems. In fact, the Side Finger Print unlocks the device in about 21 seconds while the Fast Face Unlock ensures that you’re up and about in almost 77 seconds.

Galaxy M51 comes with Widevine L1 Certification that gives you a full-fledged Blockbuster experience, starting with HD content streaming from Amazon Prime Video and Netflix, immersive Dolby ATMOS with headphones and Music Share with your friends on your connected Bluetooth speaker.

As for offers, we hear that there would be a limited period Introductory Launch Offer from 18th to 20th September on Amazon.in. Customers using HDFC credit and debit cards would get up to INR 2,000 instant cashback on both EMI and Non EMI transactions when they purchase the Galaxy M51. Additionally, customers may get up to INR 18,000 off on Exchange and, a Total Protection for their Samsung M51 at less than INR 5 a day. Click here to know more.

We have already hit the “Notify Me” button on samsung.com and cannot wait to get our hands on this stunning device. And, why shouldn’t we? The Samsung Galaxy M51 has ticked off all the right boxes – unbelievable battery, a stunning look, kickass camera and mind-blowing performance. We think Galaxy M51 is worthy of the title – Meanest Monster Ever and going by the rumours, we think it’s going to retain the title for years to come. For more details, click here.