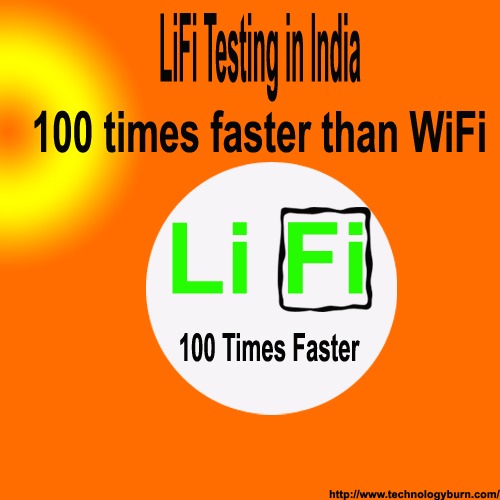 WiFi 100 times faster than India, the dream of test Wi-Fi in digital India cannot be fulfilled until India remains on the bottom of the list for Internet and connectivity Slow Internet Speed has many problems due to poor connectivity due to WiFi You will know about it but now you should know about LiFi.

LiFi is a technology that is hundred times more WiFi in terms of connectivity. Actually, it works with the help of LED bulb. Under this technique, the LED bulb installed in your home will also transmit high-speed data and will not require WiFi or broadband for it.

According to the report, the Indian government is testing this technology so that it can be used. According to a report by ET, recently, the IT Ministry has tested LiF (Light fidelity) as a pilot project. In this, LED bulb and light spectrum are used to transmit data from the speed of 10gbps. Its range of connectivity is more than WiFi. Generally, you can connect a room or an artificial via WiFi, but LiFi’s radius is up to 1 kilometer.

Since there are many problems in connecting fiber by fiber in India everywhere and it will take a lot of time. In such a situation, the Government would like to provide connectivity to the areas through liaison where the connectivity through the fiber is becoming difficult.

Director General of the Education and Researcher Network, Nina Pahuja, told ET: “The biggest use of LiFi will be done in the country’s smart cities in the coming days. Its theme will be the Internet of Things for Modern Cities and it will be connected to LED.

What is LiFi technology

In this technique, Visible Light Communication (VLC) has been used for Internet connectivity through which its connectivity has been recorded at 1Gbps in Speed Lab, which is 100 times more common wifi.

Do not understand this as the ‘Internet’ speed, it is a connectivity speed.

Similarly, understand the 1Gbps speed of Li-Fi as Internet speed, since this router has the speed of connectivity between your device, which will not make much difference to your internet speed.

Office and local networking will benefit

If this technology starts, it will be beneficial in local network where all the computers are connected to the local WiFi network. Estonian company CEO Deepak Solanki told an English newspaper: “We are running a pilot project for testing this technique in many industries so that this VLC technology can be used”

This technique will also help in creating a secure network because it can not cross its signal wall like the WiFi. For example, if it is installed in a room, its signal will not go out of the room, so its connectivity will be even stronger and secure. This is the reason why data traveled through 224Gbps maximum speed in the lab via LiFi.

If you have any questions, you can ask us by commenting below and we will try to answer all your questions as soon as possible.