Vasant Panchami: It was on this day that Mother Saraswati was born, this is the story

On the day of Basant Panchami, worship of Lord Goddess Saraswati is worshiped exclusively. Mother Saraswati was born on the same day It is said that when Lord Brahma created the creation with the command of Lord Vishnu, the earth was completely deserted and there was an atmosphere of sadness all around. To overcome this sadness, Brahma Ji sprinkled water on the earth from his kamandal. These strengths appear to have a power of four arms.

There were a harp, book, and garland in the hands of this power. Brahma Ji asked to play the harp with power so that the sadness of the earth would be far away. As soon as Shakti used to send the string of veena, the whole earth started fluttering, all the living beings got the voice. That day was the day of Basant Panchami.

There are different opinions about Mother Saraswati in the Puranas. In the Puranas, Brahma’s Manas son is mentioned, but according to the knowledge, there is no mention anywhere that Saraswatiji Brahmaji’s appearance was revealed. According to another legend, Goddess Mahalakshmi (not Lakshmi), who came to be known as Saraswati, the same form of Goddess Saraswati. However it needs to be researched, whose mother was Saraswati of Mata Saraswati.

Vasant Panchami: It was on this day that Mother Saraswati was born, this is the story 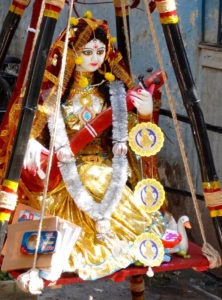 Two texts of Hindu religion ‘Saraswati Purana’ (This mythology is not included in 18 Puranas) and ‘Matsya Purana’ is a reference to the creation of Brahma, Saraswati, of creation, as a result of which the first human ‘Manu ‘Was born.

Some scholars consider Manu’s wife as Shrasarupa as Saraswati. Saraswati is worshiped by many names, including Bagishwari, Bhagwati, Sharda, Veena Vignani and Vagdevi. Due to the origin of music, it is also Goddess of music. Celebrate the day of Vasant Panchami in the form of his birth anniversary.

It is said that when Brahma composed the universe, he was alone in this entire universe. In this way, he created Saraswati, Sangrah, Brahmi with his mouth. He started attracting attention and continued his eyesight on them. To avoid the sight of Brahma, Sarasvati kept hidden in all four directions but he could not escape from them.

So Saraswati went into the sky and hid, but from his fifth head Brahma discovered him in the sky and requested him to cooperate in the creation of creation. After marrying Saraswati, she gave birth to Swabhupu Manu as the first person. This child of Brahma and Saraswati is said to be Manu, the first human to be born on earth. But according to another legend, Swayambhuva was Manas son of Manu Brahma.

adminhttps://technologyburn.com/
Amit is the Chief Technical Manager of “Technology Burn”. He has a very deep interest in Web Development and Programming. He has a 8-year experience in web Developments he lives in Jalandhar. Who loves to be a self-dependent person. His passion, dedication and quick decision-making ability make him stand apart from others.
RELATED ARTICLES
EDUCATION

How To Learn Digital Marketing

Need to change education in seven ways in 2018